Time trial day again! One hill against the clock, a later start and much less time on the bike. In many ways a break from our usual full stage routine but still a very intense hour or so to prepare for and deliver.

Col de l’Izoard from Briançon, 19km and with about 1200m of altitude gain. A steady uphill start for the first 4kms, then 6kms of big ring territory, then 9kms to the top at a fairly sustained 8% average. A good road surface to look forward to and perfect sunny conditions.

I woke up after a good night’s sleep again, after a warm up on the run in to Briançon I was feeling good. It’s like I’m still waiting for the fatigue of the last 12 stages to take effect. My expectations today were pretty conservative. Time trials like this are never likely to create big time differences. There might be a case for riding steady, maybe a minute or two below a threshold effort, it’s not as if I’m desperate for seconds. My main priority now is just to get to Nice on Saturday in decent shape with no disasters.

Although I’d ridden this climb several times before I’d never gone at it in a race situation. I checked my peers’ previous times on Strava and it looked like I was in for an hour of work, maybe a fraction more. My warm up felt good, my legs and body felt quite fresh. My resting heart rate this morning was settling too, a good sign that I was not too exhausted. At the beginning of HR Pyrenees my resting heart rate would have been around 45, nothing silly extreme. Over the course of the last 12 days it’s crept up to 60 as I can feel my body desperately trying to repair itself every day. This morning it was more like 52, that’s good.

Maybe I’d do ok today. As I prepared at the top of the ramp I was more relaxed than usual and feeling optimistic. Off we go, down the ramp in the atmospheric centre of Briançon, a great place to start an hour of hardship. Over the timing mat, 20 seconds behind Jeff Mahin and 40 behind Richard Scales.

Into a rhythm. 4kms of steady 7% ish. Keep an eye on the power. My ‘fresh’ threshold for a climb like this would be about 310 watts but with all the water under the bridge in recent days 280 watts would be more realistic. I kept things under 300 and it felt surprisingly comfortable. ‘Settle down’ I said to myself, ‘forget the others on the road’ ‘keep it calm and wait until later to push if there’s something left’. Those first few kms went smoothly and I felt great. 290 watts felt easy. My heart rate was rising nicely towards 160 still way lower than my fresh version would but none the less it was going up, another sign that the body is happy to give it some.

After about 6kms Mitch came past me, ‘good ride mate, keep something in the tank for the end’ I said encouragingly. He did, and went on to post a good solid time. I was keeping my gap behind Jeff, he’s a strong man and I was happy holding his pace. I’d already reeled in Richard which gave me confidence too.

10kms to go, this is going well. With the exception of Mitch and the class act that is Nico Roux who eased past me, I was gaining on the majority of riders ahead. I felt very solid. There was sweat dripping off me and I’m sure my face would have been gnarled with effort but inside I was comfortable. The only issue was if I’d gone too hard too soon. I was still waiting for my first ‘blow up’ in the double Haute Route, would it happen now? It didn’t feel like it.

6kms to go, still good. I feel smooth, the 290 watts feels creamy. That might sound weird but it just felt that way. Granon yesterday was tough, 265 watts there felt harsh and painful. Today the watts came to me. 4kms to go, still reeling riders in, still going well. I made good moves around some of the flatter hairpins and carried good speed out of them.

I’m doing the maths, 300m more climbing to do, that’s 15 minutes left at a VAM of 1200m. This is looking under the hour, that would be cool. 2kms to go, I pass Louis-Paul, Bruno, Brent, Markus and Martin in that area. I go past them pretty quicky. I’m feeling like I’ve got wings. 1km to go, I don’t care about saving myself for tomorrow, I’ve got great legs now so use them! 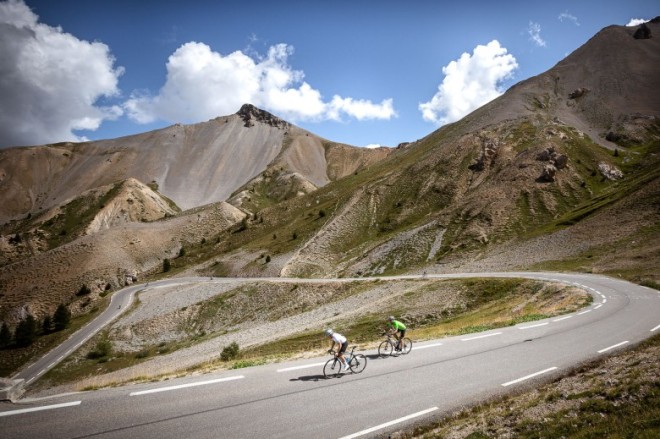 That final km didn’t take long. I came over the line in a little over 58 minutes, about 6 minutes behind stage winner Ruari Grant, but for me, that was a fantastic result. 14th on the day and still 13th on Alps GC. No major changes for anyone really today.

My ride today was one of my absolute best ever. I was smooth and really enjoyed every moment. I’m shocked at how I can still sustain 285 watts for an hour at this stage of things. It’s way above my expectations. Bruno said to me the other day under a tree at the foot of Alpe d’Huez that when he did the ‘double’ last year he felt like he hit a wall midway through the second week, mentally and physically. Then he came really good at the end. He said that would happen to me. That’s exactly how I feel right now, almost as if the fatigue of this thing is being matched or even overtaken by the training benefit of what we’ve done. Maybe things will change tomorrow but right now I love my legs!

The riders on my team keep going on about heart rate. ‘Why won’t it go up?’. My usual 310w threshold corresponds to a heart rate of about 175. 175 bpm is just not happening now though. The legs feel great but the heart just won’t go up. My effort today was at an average of a little over 150 bpm. The heart rate figures decline at a greater rate than the power figures do. I’ve experienced this on every Haute Route I’ve done. Basically, your heart rate figure become useless. Using it as a reference just doesn’t work. Leave your heart rate strap in your bag and forget it!

2 more days to the finish. A relatively short 104km stage tomorrow and a giant, near 200km jobby on Saturday. I can almost smell the beer in Nice!