A shorter blog today compared to my usual 2000 words! Need some time to recover from an epic ride!

144km and a daunting 4600m of climbing ahead of us today, gulp. Col de la Madeleine, Col du Glandon and then the ascension of Alpe d’Huez.

For those of us having done the Pyrenees last week this was like doing a Marmotte preceded by 9 Etape du Tours in the previous 10 days! This is getting crazy!

So, the key points of my day. Woke up after a great sleep, thank goodness, really needed it. Madeleine went really well for me. A 26km climb going up nearly 1600m! Today was all about pacing, I needed to ride with a view to not cracking or blowing up on ADH. This was a huge day where if things went wrong then there could be huge time losses. I wanted to ride my own climb.

I let the frisky leaders head up the lower slopes and tapped away at a pace that suited me. Got joined by Nick from Canada, Richard Scales and another guy I don’t know. We ended up riding a fraction quicker than I would have liked. I hid all the way, no need for me to pull.

Nearer the top Richard and I pulled away and we both summited feeling we’d had a fantastic ride. We got up in about 1 hour 22 minutes, the leading group had disintegrated and we were only just behind them.

The clock stopped at the top of Madeleine, a chance to feed and drink. Richard and I were surprised at how long it took for the next riders to arrive. We’d put a lot of time into our main rivals including Louis-Paul who chases me in the Pyrenees/Alps GC. 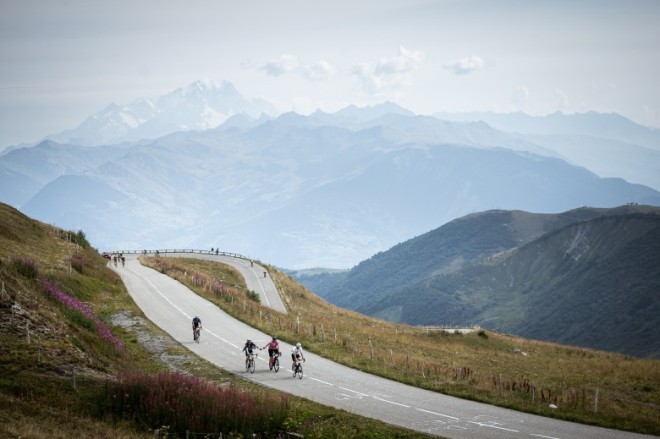 On to Glandon. Another beast of a climb, 20kms and rising about 1450m with a very steep final 3kms. For various reasons we’d all arrived at the foot of the climb at different times to begin the timing again. This meant a fairly solitary experience on the climb and not really knowing where you stood in the race. I rode solidly but a fair bit slower than Madeleine. I was getting tired and was already concerned as to whether I’d used too many of my daily beans.

I topped out feeling I’d not blown up but just so tired. Was I starting to hit the wall? Maybe this would be my first bad day.

I descended well. I know the road and it was nice to be on my own. Maybe not as fast as if I’d been with the likes of Hervé or Bruno but still ok and very stress free. It’s a descent where if you know the road you can really let things go, so many corners where you can ride through without braking…..if you know the road. Having that descent timed was good for me as I knew I’d be putting time into many of the riders new to the Alps.

The timing stopped again shortly after the descent. We then had a 15km neutralised drag along the main road to Bourg d’Oisans. I felt spent. It was hot. I was worried. I wanted to be in my hotel in ADH, not on that road. As I pulled up at the foot of ADH climb we had a feed station and then we could head over the timing mat for the final leg when it suited us.

The atmosphere was tired. Riders were hanging out there, sitting under trees, taking their shoes off, even sleeping. Everyone there seemed to be delaying the inevitable. No one had a positive word to say. We were all tired and the thought of another 1100m climb was unanimously miserable.

Alpe d’Huez is an iconic climb but not one of my favourites. A busy, engineered road to a fairly unattractive ski resort. Thoughts of ‘why are we doing this’ were rife among the riders.

‘Come on Bruno, let’s do this’. It needed someone to get on with it. Bruno got himself up from his shady spot and we got prepared for 14kms of misery……..or so I thought. 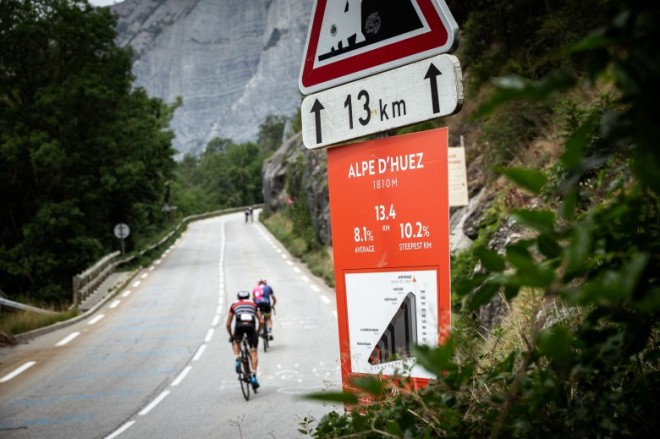 We were joined by Louis-Paul as we crossed the timing mat. I couldn’t have chosen 2 better riders to start that climb with. We rode up the first couple of kms at about 240/250 watts on my power meter. Humble numbers but ok. If we kept this up we might get up in about an hour. I’d take that. I can do do this climb fresh in 50 minutes but an hour after what I’ve done in the last 10 days would be fine. I just wanted to not blow up and bleed time to my rivals. It felt like an exercise in damage control. A carefully executed climb, always trying to respect a tiring and potentially failing body.

3kms up and I’m happy. I can do this. I’m not going to blow up. Louis and I pushed the pace a fraction, Bruno fell back. Halfway up, still ok, starting to actually enjoy it and enjoying riding with Louis-Paul side by side with a few words exchanged now and again.

5kms to go. I’m on it. My legs are feeling strong. I like the idea of finishing with Louis-Paul but I like the idea of exploiting how I feel more. I smoothly push the pace up a notch, more like 270 watts, I can’t hear him anymore, I know he’s gone.

Those last 5kms were great. Sure, I wanted to get to the finish but I was firing. I was buzzing. A survival ride up ADH had turned into a really strong one, so different to what I anticipated. The final km is flatter and I know ever twist and turn of it. Big ring, get that bike moving and get it done. For the first time ever I raised my arms in victory over the line. A personal victory. Not beating anyone in particular but just the achievement of what I’d done and how my body and mind hadn’t let me down started to overwhelm me. I was ecstatic. I think I was massively relieved. This was a day with huge potential to spoil my amazing cycling party…..and it didn’t.

The emotions that cycling bring out of you are as up and down as the terrain we ride. At the foot of Alpe d’Huez I was in the doldrums, over it, wondering what the point of it all was. 57 minutes later at the top I was on cloud 9 and loving every pedal stroke. What a sport!

Fabulous results today from all our team, I won’t do all the detail but big improvements for many of the team, star of the day probably was probably Paul Martin finishing in the top 200 and lifting himself miles up the GC.

Tomorrow a much shorter day and a later start. Brilliant. Shorter stages mean faster and more intense racing though so still lots of work to be done!