The Stage 4 route somehow managed to cram in a whopping 3250m of climbing into just 82km. 3 classic and contrasting climbs: Col de Peyresourde, Hourquette d’Ancizan and then the Col du Tourmalet.

The weather forecast was shocking, heavy rain for the duration of the stage and cold conditions particularly at 2115m atop the Tourmalet. Our pre stage briefing made it clear to us that adaptations to the course on the day could happen and we were ready for every scenario this morning from a totally cancelled stage right through to a normal completed day. With rain almost guaranteed the decision was made pre stage to neutralise the main 2 descents after the first 2 climbs. We would only be timed on the ups and few flats in between.

We awoke to the expected heavy rain and headed to the start just before the scheduled 7.30am roll out from Bagnères de Luchon. I’d already checked emails in the hope that maybe the organisers had pulled the pin on the day but no such luck. I was really not in the mood for this at all. A non riding day would be fine by me and another step closer to getting my 2 weeks done!

I spent some time alone sheltering near the start and trying to get my head around what to take and wear to keep me warm. I was going to get soaked pretty quickly anyway so I went for a fairly economical approach with a light rain jacket that I could pack into a pocket if conditions improved. As I lined up at the start my gloves were soaked within a couple of minutes so they went straight in a pocket.

2km of neutralised riding as per the previous day took us to the start of the timing and straight into the 14km climb of Peyresourde. Usual story, the leading 5 riders in GC headed up by overall leader Carlo Fino set the pace. I went with them feeling fairly comfortable despite not having any sort of warm up that morning. After about 1km there was a clear split, the ‘big 5’, myself and Polish rider  Krzysztof Szuder. I stayed with the group for a while, it was a very similar situation to the previous day. We were building a good gap on the rest of the field very quickly. The pace was too high for me but I knew if I could hang on for a while it would give me a great launchpad to gaining time on the riders behind. After about 4km up the climb I let the group go and to my relief Krzystof lost touch too. This was good as I’d have someone to ride with over the mid part of the climb where the gradients eased a little.

The leaders moved well up the road but Krzystof and I were still going well. There was no one in sight behind, time to settle in and find a sustainable effort that would get us to the top where the timing would stop. I was marginally stronger than Krzystof and spent more time on the front than him. I felt great, my reluctance to ride in the morning had turned into very different emotions. I was loving every pedal stroke and really felt on form. With 5kms to go Krzystof gasped a few words out, apologising for not being able to work on the front. ‘No worries, hang on for as long you can’, I was more than happy to pull him up as he’d done his turns earlier in the climb. ‘I might need you later in the week Krzystof!’. Then he asked me if I was an ex pro! That made me feel on top of the world. ‘No way Krzystof but maybe I’ll become one when I’m 60! 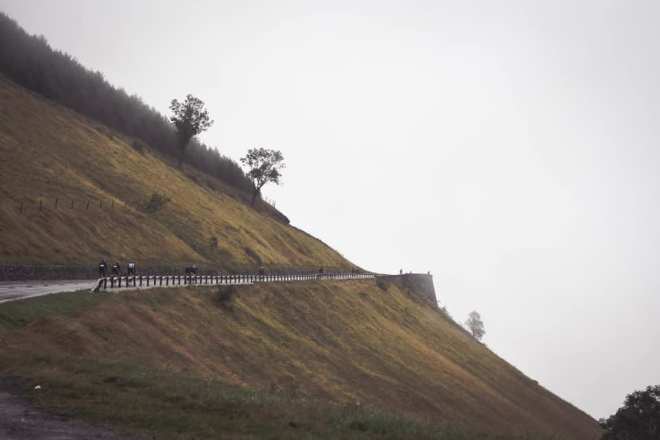 3kms to go and Krzystof started to lose touch. As I peered up to the finishing hairpins I was astonished at how far up the road the flashing lights of the Commissaire’s car were. That car is always with the leader, Carlo was there and he ended up topping out 5 minutes ahead of me. Different league altogether (and a fair bit younger!) I was still happy though, I reached the summit strongly with Krzystof about 20 seconds behind me.

We then faced a long descent into the valley, untimed. The rain was still lashing down and I was relieved to get to the valley floor unscathed. I headed over the timing mat with another 6 or 7 riders. The ‘big 5’ were already ahead. We then faced about 8kms of gentle downs and ups until the next climb, Hourquette d’Ancizan, 10kms at an avarage of about 8%. The group I was in included Krzystof and other riders just behind me in the GC. Having taken time from them all on the Peyresourde I’d already decided that I’d most likely ride up with the group take some pressure off myself. I knew I had no chance today or in the coming days to catch any of the guys ahead of me in GC (unless they messed up in a big way) so for the first time in 4 days of riding I started to think about the big picture of surviving the 2 weeks. I’d done enough for the day and I could afford settling down and also conserving some energy for the Tourmalet, and beyond.

Hourquette is a wild and beautiful place, or at least it is when you can see it as I’ve been lucky enough to do on several occasions in good weather. Today’s rain and low cloud shrouded much of that beauty and it became a focussed trudge up a coarsely surfaced ‘heavy’ road. I enjoyed being with the group, I spent a bit of time on the front before I eased to let Rod Archibald lead things for a while while I sat in and ‘sucked wheel’. The weather was still bad, raining gusting and almost a hint of hail or sleet in the air. Krzystof pushed ahead with 1km to the top and I followed for both of us to reach the summit and timing mat about 15 seconds ahead of the group. 2 climbs done, one to go.

We pulled up at the feed station to get some calories to keep us going and Carlo shouted to me ‘No Tourmalet, race finished!’ Music to my ears. The race was cut short due to concerns as to the conditions on Tourmalet whose summit is 600m higher and a good deal colder than where we were on the Hourquette. I was relieved. I double checked with the officials and then helped spread the word and called Martin to get our post race logistics in place to get all our team off the hill and back to civilisation and warmth. Generally everybody was really happy with the decision. Just a few characters disappointed at not getting to tackle the ‘big name’ of the Tourmalet. It can wait for a nicer day. It’ll still be there for a long time to come! I’m convinced it was the right thing to do, especially after seeing the same conditions in 2014 on the Tourmalet for the Etape du Tour where having lots of lycra clad cyclists up in the ‘death zone’ cause a lot of distress and difficulty.

We were still credited with our times so far for the stage. A very similar scenario to what happened in Stage 19 of the Tour de France this year when the stage was curtailed on the top of the Col de l’Iseran. Just like that day, if we’d known that the stage would finish on Hourquette we’d have all given it a bigger effort and raced for the line but it was the same for everyone and I for one was happy with my ride and the decision.

The weather is clearing now and it looks like the next 3 stages will enjoy fantastic weather after today’s difficult episode. Tomorrow is Individual Time Trial day, one climb against the clock. Col de Spandelles providing what will be about 45 minutes of pain and toil for the leading rider tomorrow and a fair bit more for the rest of us!