My journey to Taiwan effectively started last November when I decided to commit to this crazy event. My physical journey would start though in Milan, not too far from where I’m based in France. A very pleasant Cathay Pacific flight via Hong Kong ensued. As we approached Taiwan I got my first glimpse of the big mountains that run north-south along the length of the island. In 5 days I would be on top of them….hopefully. 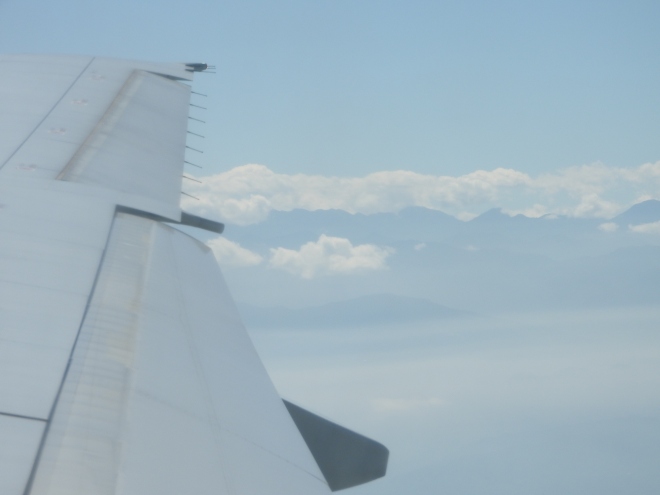 Everything in Taipei, Taiwan’s capital was easy. From the moment I got off the plane to arriving at my hotel near the middle of the city I was struck by both the efficiency and the friendliness of this place. The train system in to and around the city was so slick. When I had any hesitant moments at ticket machines someone would always seem to rush over and help with big smiles and eagerness to make life easy for me. I wasn’t used to this level of hospitality where I come from!

I settled into my hotel and had a few hours to kill until Oliver would arrive on a later flight. My only tourist like objective was to head to the Taiwan 101, a huge 500m skyscraper that was the highest in the world for a while after it was built in 2004. My 3km walk to the it from my hotel got a bit more tenuous than expected.  I wouldn’t need a map surely to find such a big thing…..wrong….too many other massive buildings in the way for me to see the damn thing until I was basically at the foot of it. Anyway, at least a bit of extra exercise gets the metabolism going after a long flight. 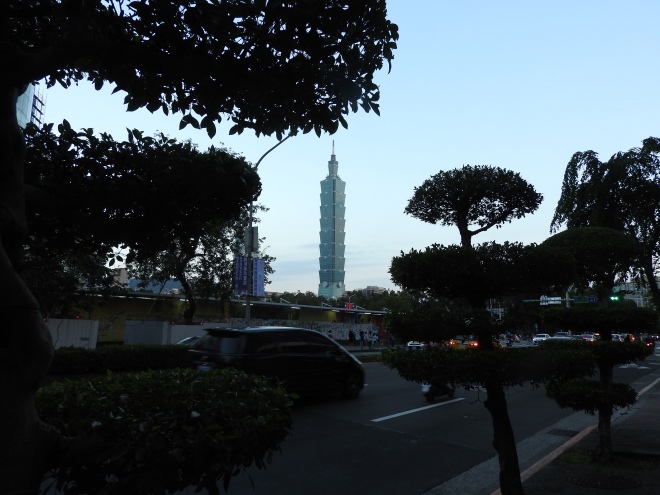 The view from the top was predictably spectacular and was followed by a swift, metro assisted return to the hotel. After meeting up with Oliver we headed out for a quick bite to eat at a local night market followed by a much needed deep sleep. 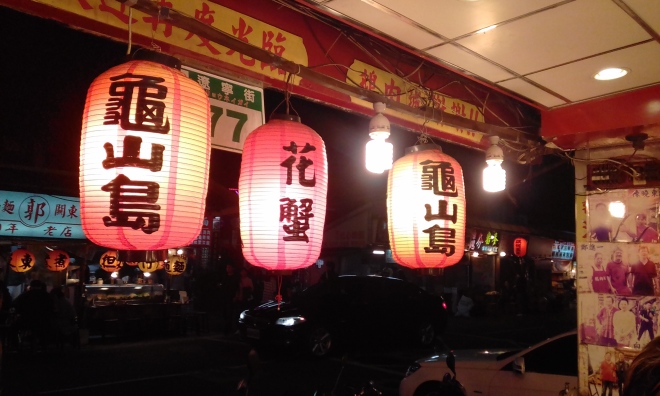 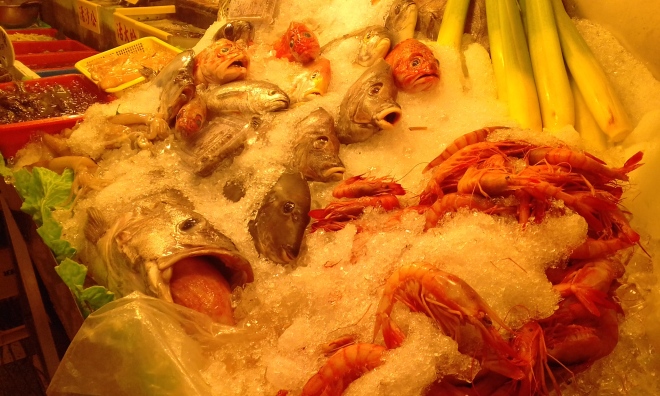 Next morning Oliver and I came down for breakfast, what would breakfast be? It was, as every meal has turned out to be, a pretty extensive selection of just about everything you’d want, plus lots of other things! Certainly a few mystery items and creatures that I was a bit unfamiliar with but enough recognisable stuff to keep me very well fed and happy. We had a few hours to kill before we’d head by train to Hualien. We had a good look round the touristy sights of Taipei and departed feeling that our 24 hours there had been a great start to our adventure. 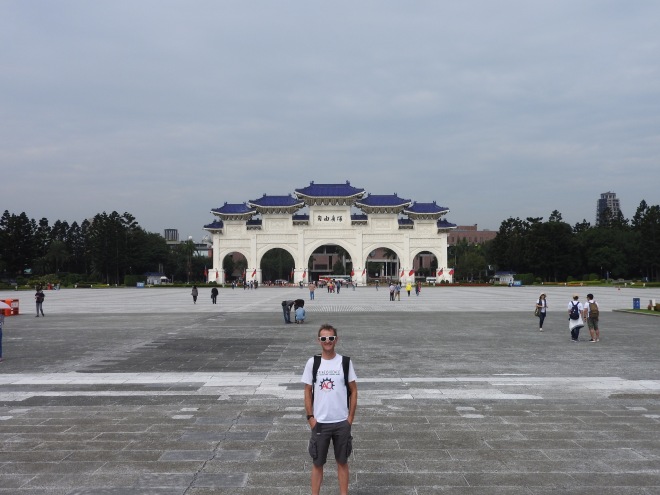 Early afternoon we headed south on the train from Taipei to Hualien. A little over 2 hours to the town that would host the KOM event. We were greeted by the shuttle and whisked away to our hotel . I’d paid for the very reasonably priced accommodation package provided by the organisers of the event. My expectations were somewhat exceeded when we arrived at the vast reception of the rather palatial Parkview Hotel. This place was seriously big and certainly spacious enough for a significant indoor ride if needed. We were going to be alright here.

The following day, well nourished by yet more great food, we headed out for our first ride in Taiwan. Hualien is big, an urban sprawl bigger than we expected. Wide roads and apparently sensible driving demeanour made riding through town comfortable and safe feeling from the start. As we headed out of town we encountered pretty lakes, rice fields, jungles and monkeys. It was noisier than expected too, with various small creatures in the jungle contributing to a very different cycling experience for us. 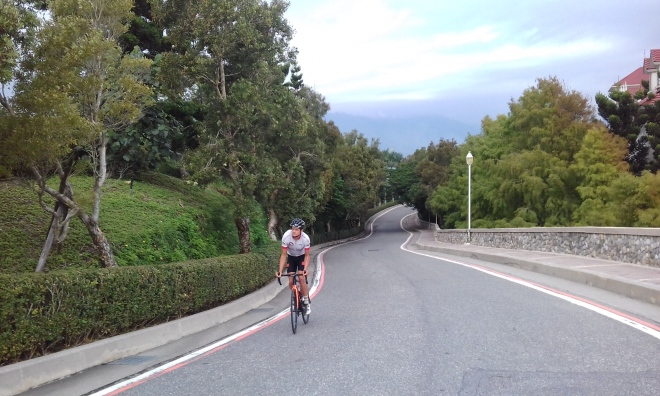 Ride done, 80kms or so and a decent climb of about 6kms thrown in. Bikes running well and legs feeling really good. I put a big enough effort in on the hill to see my heart rate and power levels rising to numbers that gave me confidence that my legs were there and that I was not over tired. After a long journey and not riding for a few days that felt good. Also, it was our first exposure to riding in high humidity. It’s about 26°C in the day (not much cooler in the night) and humidity levels of around 95%. Even on the climbs it doesn’t feel particularly uncomfortable but maybe I’ll have a different opinion on Friday! We’ll see.

Our second ride was equally good. A good bit of route planning the night before culminated in another very enjoyable circuit of about 90kms with another 6km climb to keep us busy and providing to great sea views.

On our return to the hotel riders are starting to turn up for the event. We’d elected to come to Hualien on Monday, early to settle in, ride and get over jet lag but the majority of riders would arrive on the Wednesday with the event falling on the Friday. We just learned that there will be a record breaking 750 riders in the event and a large proportion of them will be in our hotel. The place is really starting to buzz. So many bike riders for whom this event is a major goal in their year, so much anticipation. 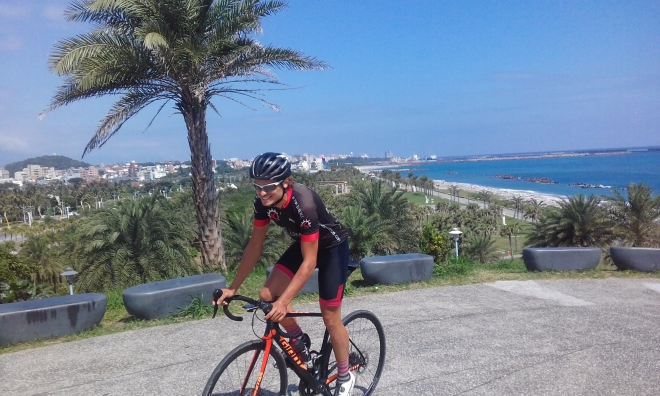 One day to go! Oliver and I headed out for a gentle spin along the coast. The sun was out and we really got to see Hualien at it’s best. We cruised along to the start area to check it out in readiness for the next day before heading back to the hotel. 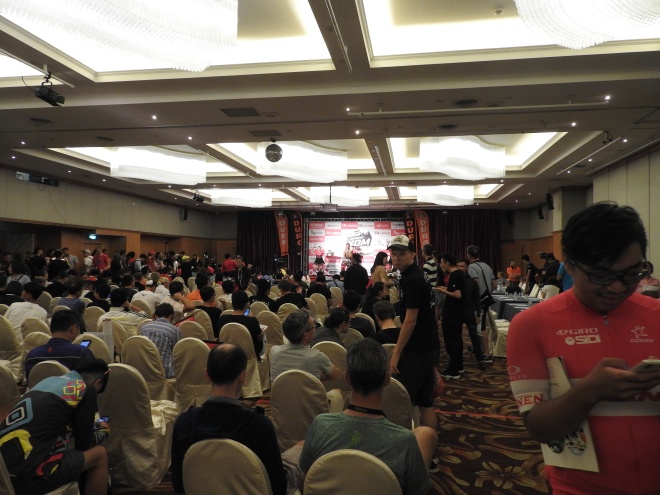 In the afternoon we did all the official registering and bib collection followed by a presentation in which all the ‘spotlight’ riders were introduced to us all. 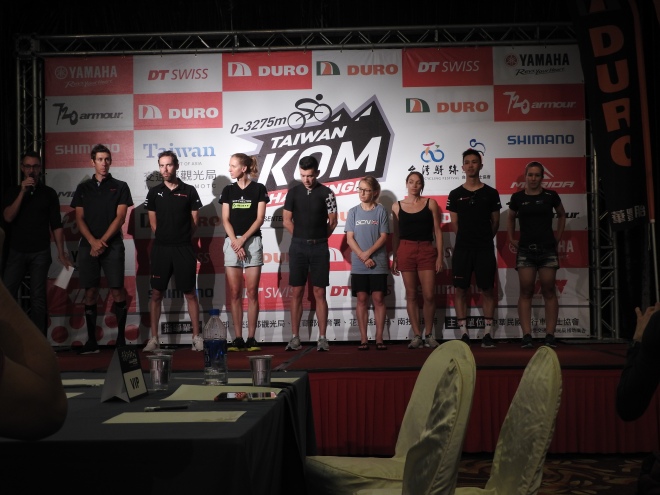 We then had a briefing from the event organisers followed by a commissaire’s briefing. Although it was only Oliver and I who were representing Alpine Cadence we’d entered as an official team. It was assumed that we’d have a team car so we graciously accepted the team car stickers and deliberated over how we’d get Martin, our support driver, and our car, over from France in the next 12 hours! 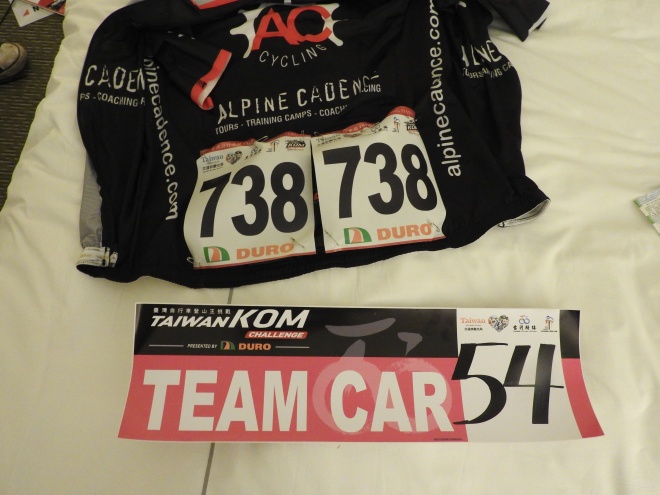 We retired to our rooms where I was able do my usual pre race faffing and nerves before enjoying a really good night’s sleep.